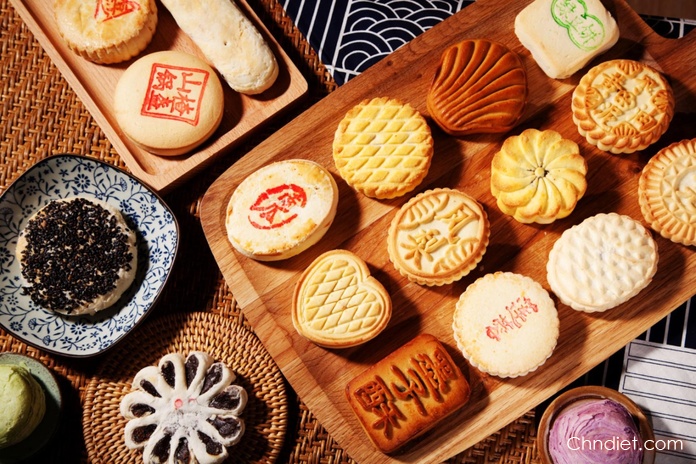 The double-layer steamed milk custard originates from Shunde city, Guangdong province. As a dessert with a history of over one hundred years in the local place, it is a famous must-taste dessert for many visitors going to Guangdong. Its main ingredients include milk, egg white, and white sugar. It tastes fragrant and sweet.

The ginger juice collided with milk originates from Shawan town in Guangdong. Buffalo milk production is the sideline business of local farmers, therefore, in the local place, there are a lot of milk snacks among which the ginger juice collided with milk is the most famous one. Later, this dessert spread all over Guangdong, Hong Kong, and Macao, becoming one of the most popular desserts in Southern China!

Although the ingredients of this dessert are simple and only require ginger juice, buffalo milk, and sugar, the production technique is very strict. So, it is very difficult to find the most authentic ginger juice collided with milk outside of Guangdong.

The sweetheart cake is a traditional pastry in Chaozhou of Guangdong. This pastry is known to all in China. There is a touching legendary for the sweetheart cake. Quite long ago, there were a couple loving each other. Unfortunately, the husband got a serious disease. In order to cure her husband, the wife sold herself. The husband who lost his wife was not discouraged and managed to develop a type of cake with amazing flavor. Finally, the husband redeemed his wife with the money earned by selling the cake!

The tangerine-flavored red bean paste is a traditional Cantonese sweet soup dessert. The cooking method is very easy. You only need to boil the red beans, tangerine peels, and rock sugar with water. In hot summers, the Chinese people also like to make this sweet soup with mung beans. Because the mung bean has the function of clearing the inner heat and is the most popular food in summer.

The fried round flat cake is a food made from fried glutinous rice flour and sesame seeds. It is round and in a golden color. You can add different fillings such as red bean paste, peanuts, etc., to create different flavors, or make it without any fillings. 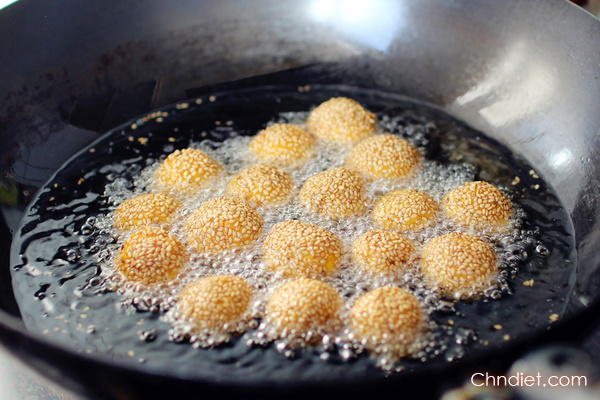 The water lily crisp is a very famous traditional dessert in Hangzhou. It is made from fried wheat flours and fillings. The famous chef in Hangzhou used to win the silver medal prize in the China Cooking World Competition with this dessert. The water lily crisp is in the shape of lotus flower. With exquisite appearance and crisp, fragrant and sweet tastes, it is a must-ordered dessert in the local banquet.

The sweet green rice ball is one of the traditional desserts in Zhejiang province of China. This dessert has deep associations with the Cold Food Festival of China. The locals are accustomed to eating this dessert around the Tomb Sweeping Festival in April each year.

To make the sweet green rice ball, you need to mix the wormwood juice into the glutinous rice flour and dye the dough into the green color. After that, use the dough to wrap the filings with different flavors, such as the bean paste, the lotus seed paste, and etc. It will be ready for eating after steaming.

The Osmanthus cake is a well-known pastry in the Jiangnan region of China. It is said that this type of pastry has a history of more than 300 years. As a pastry made from glutinous rice flour, sugar, and Osmanthus, it has strong Osmanthus odor and tastes fragrant and sweet!

The walnut cake is a very common dessert in China. Its main ingredients are wheat flour, egg, sugar, edible oil, and walnut kernels. Featuring crisp and sweet, the dessert looking like biscuit is very popular.

The ice powder was originated from Yunnan and Guizhou and later spread to Sichuan. Thanks to the prevalence of Sichuan cuisine, this type of dessert has gradually been accepted and liked by many people. The ice powder has cool and refreshing taste, so people prefer to drink this dessert in summer.

The ice powder is made from the seeds of Nicandreae (scientific name: Nicandra physalodes (Linn.) Gaertn.). The ice powder mixed with water looks crystal clear and transparent and can be made into desserts together with sweet water, and fruit and vegetable.

The tofu pudding is a very famous snack in China. It can be made into dessert either with a sweet taste or with a salty taste. Generally, the people in Southern China prefer the sweet taste and like to make the tofu pudding together with red beans and some fruits into some desserts with rich flavors.

The asparagus crisp is made of wheat flour and maltose. It is as white as silk and tastes fragrant and sweet. It is said that in ancient days, the asparagus crisp used to be a dessert that only emperor could eat, and afterward, the dessert was spread to the folk and became a traditional folk dessert. It has a history of 2000 years until today.

The sesame seed candy can date back to the Ming Dynasty (AD 1368 to 1644) and is a traditional folk snack of China. The sesame seed candies in Xiaogan region of Hubei are the most famous ones. Many Chinese people would always keep this food at home. This type of food has neither any fixed forms nor any standard tastes. Most of them are made of glutinous rice, maltose, sesame, and peanut, and tastes fragrant, sweet and crisp.

The sweetmeat has a history of 2000 years in China. As a dessert made from fruits and vegetables after being marinated with sugar or honey, the sweetmeat has individual flavors and varieties in different places. Generally, the sweetmeats made of mangos, strawberries, waxberries, hawthorns, yellow peaches, and the like are more popular.

The egg tart is a dessert made of wheat flour and egg liquid after processing and toasting. As a typical western style pastry, egg tart used to be widely spread in Hong Kong and Macao due to historical reasons. Later, this dessert became more and more localized and was spread to mainland China. Today, you can find this type of dessert in all big cities in China.

The pineapple bun is a kind of sweet bread in Hong Kong. Generally, it is in the semi-sphere shape and looks in golden color, with an uneven crisp crust on the surface. Actually, this kind of bread has no ingredient of pineapple. The reason why this bread is named as the pineapple bread is that its shape is similar to that of the pineapple.

The grass jelly is a special dessert in Fujian and Taiwan. Because of its function of cooling and refreshing, it is also served as a drink or snack in summer. The ingredients of this dessert are very rich, including mesona (scientific name: Platostoma palustre), taro balls, pinto beans, peanuts, raisins, red beans, honey, milk, and so on. This is one of the favorite desserts of Chinese women!

The rolling donkey is one of the most traditional desserts in Beijing and Tianjin of China. The surface of the dessert is coated with an earth-yellow powder that looks like the specks of dust caused by the rolling wild donkey; therefore, the dessert is named as the “rolling donkey”. This dessert is mainly made from glutinous rice flour, soybean powder, and red bean paste. It tastes soft, fragrant, and sweet.

The tuckahoe pie is one of the traditional pastries of Beijing. Tuckahoe is a kind of Chinese medicine with the functions of diuretic and soothing the nerves, spleen, and stomach, therefore, the tuckahoe pie is also regarded as a type of healthy food with nourishing effect.

The dried milk tofu cake is the most common milk dessert in the homes of the herdsmen in Inner Mongolia where is teemed with cow milk, sheep milk, and horse milk. The locals are accustomed to making the milk into foods convenient for storage and carrying after the processes of fermentation and solidification. Because it looks like tofu, so the dessert is named as the dried milk tofu cake. It mainly tastes sour and sweet.

China’s moon cake has inseparable associations with the Mid-Autumn Festival (the fifteenth day in August according to China’s lunar calendar). The moon cakes were initially used to be the articles of tribute for worshipping the moon. The moon worshipping was an ancient worshipping activity in China and was evolved into enjoying the moon, eating the moon cakes and other folk customs. Mid-Autumn Day is one of the four traditional festivals in China, therefore, the mooncake is a very special traditional pastry for the Chinese people!

Because the diet habits vary in different places of China, the moon cakes have been developed into numerous types and flavors, among which the comparatively famous ones include the Cantonese style, the Beijing style, and the Suzhou style. The moon cake contains a lot of oil and sugar and belongs to the high-energy snack, so don’t eat too many.

As one of the traditional foods of the Han nationality of China, the eight-treasure rice pudding is popular all around the country and is also the typical food on the Laba Festival (the eighth day in December according to China’s lunar calendar). After steaming the glutinous rice, add edible oil, sugar, bean paste, red dates, lotus seeds, longans, and many other food materials, then continue to steam them in steamer until it is ready. The materials in the eight-treasure rice pudding can be adjusted freely depending on your own taste. This is a dessert easy to make at home.

The lotus root stuffed with glutinous rice is a traditional dessert in the Jiangnan region of China. The lotus root has good symbolic meaning in Chinese culture, so this dish also often appears at the wedding banquet. With lotus root and glutinous rice as the main material, together with rock sugar and honey, this dessert is very popular. 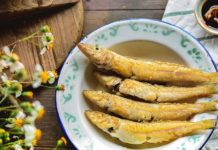